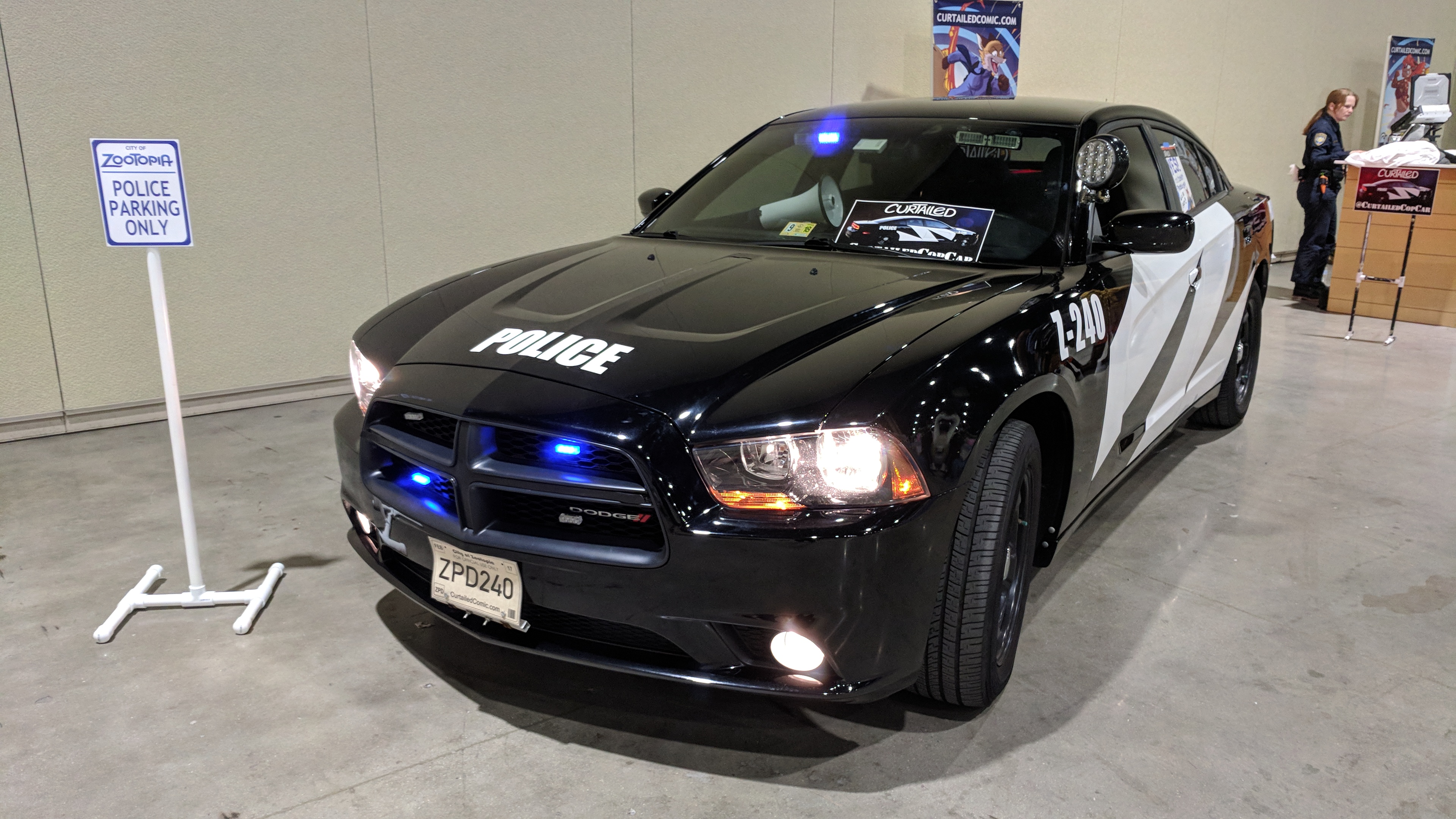 Once upon a time, Fox met a gentleman who said he could get him a Dodge Charger Pursuit — the model reserved for police — brand new from the factory.

Knowing that shouldn’t be possible, Fox called his bluff.
The gentleman was not bluffing.
Fox’s hobbies suddenly got a lot less expensive…

Since then, the Curtailed Cop Car has become a character of its own, joining Fox and Mandy in their over-the-top costumes and convention appearances.

If you’ve taken photos with the Curtailed Cop Car, please share them with the hashtag #curtailedcopcar!

The Curtailed booth and the Cop Car in its “Zootopia” costume at Katsucon 2018!

“Is that legal?”
Yup!
The way we do it, anyway. Before showing the car at an event “in costume,” we do a great deal of research into local laws, and a great deal of communicating with venue owners, event runners, and local law enforcement. “The cruiser” has had its internal electrical systems modified and heavily upgraded to quickly switch from “Street Legal” to “Center Stage”.

If you’re considering something similar, please do your own research – laws vary greatly state to state!

“Is that paint?”
The Curtailed Cop Car is solid black.
Any designs or words are automotive vinyl.
Mandy and Fox have designed these and apply them to the cruiser only during events. It’s an expensive and time-consuming process, as the vinyl cannot be reused and must be recreated for every event. For this reason, large wraps are reserved for conventions they’re invited to as guests.

“How is it different from a normal Dodge Charger?”
The ‘Pursuit’ designation indicates it is a Charger variant produced by Chrysler that has a number of modifications made to it at the factory. The most notable are increases to durability or performance, such as those to the alternator, rims, suspension, brakes & pre-wired electrical. There are a number of smaller features, such as the fact that the car will continue to run if one leaves with the key fob, ‘stealth mode’ — which disables all lights and horns for surveillance purposes — and that the trunk and rear doors are particular about when they’ll open and when they won’t. The reason for the last one should be pretty obvious!

“What’s under the hood?”
The powertrain is essentially the R/T version you’ll see at a dealership. It’s the 5.7 litre, naturally aspirated, 370 horsepower, Hemi V-8. The Curtailed Cop Car is a 2013 RWD with a factory-set, gear ratio of 2.65.

“How fast is it?”
Let’s roll this question in with the “I bet I could outrun it!” statement we frequently hear. Ignoring the fact that you can’t outrun a radio, the Dodge Charger Pursuit has set speed records at the Michigan State Police testing track. There are certainly faster cars owned by civilians and police departments alike, but as of 2013, the Pursuit was the fastest mass-produced police car in the United States. How fast it can accelerate is based largely on the power-to-weight ratio, as police have a lot of gear in their vehicles. The Curtailed Cop Car isn’t burdened with a lot of that equipment. While we haven’t tested it, specs say it has a top-speed of 150 mph with a zero-to-sixty time of about six seconds.

“So why the costumes?”
Same reasons Curtailed started volunteering and took classes in emergency rescue training and a variety of other activities. Fox and Mandy are the kind of people that, when given an emergency vehicle one isn’t supposed to be able to get, they felt it’d be pretty lousy to roll up somewhere that was having an emergency, be expected to help, and not be able to. The cruiser has medical and trauma kits, as well as a fire extinguisher. The costumes are used to raise charity whenever possible.
The vehicle was designed and built to do good in the world — Curtailed is doing what they can to make sure that still happens.