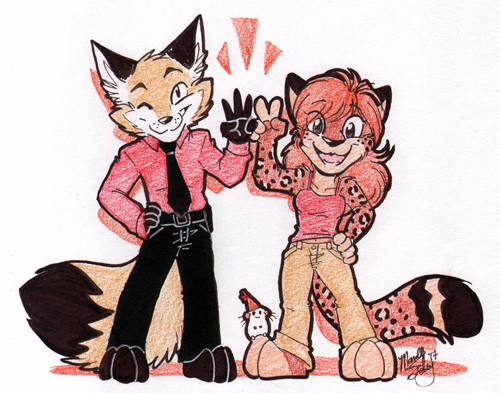 It only occurred to me to check last week and realize we’d been doing this for exactly five years now.

With this in mind, I’ve decided Curtailed is going to take a hiatus. This doesn’t mean we’ll stop updating the site, and you can expect to see us posting on social media as well, but you should expect Mandy to be getting a forced vacation from the comics.
I say “I’ve decided”, but it didn’t take much to convince her. A lot has been going on in our lives recently. Things have ramped up at our jobs. We’ve started appearing at conventions and those require time and work to prepare. Even as I type this I have work queued up on the “Curtailed Cop Car” and panels to rehearse.
Over time I’ve noticed Mandy getting burned out doing all this in addition to the comics. It’s becoming less of a fun activity and more of a chore. It’s become work–a second job–and that’s not why she started doing this. I’m worried if we don’t take a long vacation–a real ‘do nothing’ vacation–from the comic and everything else now it’ll contribute to a full burnout. I don’t want Curtailed to turn into one of those comics that never restarts, or simply ends outright, just because it became too much.

To prevent this we’re trying to destress our minds and bodies. We’re cutting out as many tasks that have deadlines as we possibly can. During the hiatus, I’d like the comic to be something we can update, not something we must. I want all our tasks to be like that: something we want to do rather than being something we need to do.
We started this as just a comic, but it’s turned into so much more. We’d like to restart the comics with a fully redesigned site that makes the comics center stage, but also showcases our other crazy activities, such as projects in the workshop, cosplay creations and activities in the recording studio I built, such as streaming online gaming. (I can’t remember the last time I got to play a game T_T)

Thank you for understanding. I suspect for many of you this isn’t an unfamiliar feeling–the world has become a lot smaller and a lot faster moving. I don’t believe our species is meant to live in a world like this. So, like my namesake, we’ll all adapt. With luck one day we’ll have pictures here of us on the weekends relaxing around a fire with a drink in our hands. I’d encourage comments of everyone else doing the same.

I love drawing comics, love this one specifically, but Fox is right, I’ve been running just shy of burnout for a long time, now. I’m bad at making myself take breaks (ACTUAL breaks). Fox has given me a few reality checks lately, I’m really lucky to have him looking out for me.

I’ve got a lot of ideas for Curtailed that I’m excited to share, but to make them happen, I definitely need some time to get my feet back under me.

We have a ton of lovely readers and I’m so grateful to all of you, it means the world to me that we’ve made something so many people seem to enjoy! Thank you for all the kind words, feedback, comments, shares, likes, and encouragement, I didn’t really imagine our little project would take off the way it has.

Oh, now also seems like a good time to point out again (Since it’s the next big thing on the calendar) that we’re currently gearing up to be guests of honor at FurTheMore at the end of the month! See ya there!

And be sure to follow the comic on social media where we’ll make announcements when comics resume:
Facebook: CurtailedComic
Twitter: CurtailedComic
Or you can just follow Mandy and I via links to the left. Cheers!