The first time I noticed Fox, he was wearing a black jacket with WTF on the front, back, and sleeves. It looked just official enough that I wondered if it was legit, like maybe he worked with the World Trade Federation or something.
The next time I saw him, it was an identical jacket, but the acronym was STFU. That pretty much removed all doubt that they meant exactly what I thought they meant…
The sakura petals and Kamina glasses may be an exaggeration, I don’t have the best memory!

The game is Rune Factory 4, by the way. 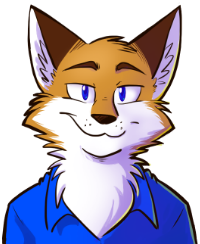 INSANE SUNGLASSES GOOOOO!
“Who the hell do you think I am?!”